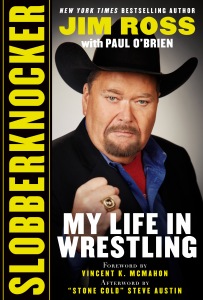 In the book Slobberknocker: My Life in Wrestling (Sports Publishing; October 2017), Jim Ross and Paul O’Brien not only write about the exciting world of professional wrestling, but they also capture the ideals of the American Dream.

Jim Ross is known to many as the greatest wrestling announcer of all time, along with his duties behind the scenes on the creative committee and talent relations of several wrestling organizations. In the book, Ross details his life growing up on a farm, his first encounter watching wrestling on television, and how he worked his way up from ring crew to the top announcer in Bill Watt’s Mid-South area, Ted Turner’s WCW, and the WWE.

Early in the book, Ross writes about getting into professional wrestling, by watching it on television with his grandparents, and make up storylines with his toy army figures while commentating on his make believe matches. After getting a chance to see a live event in Oklahoma, Ross decided that “I knew I wanted into this crazy business somehow. I just didn’t know how to find a way in.”

Ross found his way in when he and a friend started fundraisers in college after making phone calls to Mid -South Wrestling’s main man, “Cowboy” Bill Watts. After Watts became impressed with Ross’s work, he was invited to work for the company, just shy of graduating from college.

Ross’s early job in the Mid -South area involved being a babysitter for announcer and part owner Leroy McGuirk, where Ross details several funny stories in the territory, including a humorous car ride involving McGuirk and his famous cigars that McGuirk was known for. Ross also worked as a referee, on the ring crew, and helped with the booking of the shows (helping plan out the storylines).

Ross tells the reader many stories about some of the wrestlers in the Mid South, including Dick Murdoch, the 600-pound twin McGuire Brothers, Bill Dundee, Ernie Ladd, and wrestlers from the more famous time of the Mid -South region like The Rock n Roll Express, Jim Duggan, Jake “The Snake” Roberts, and manager Jim Cornette.  He also talks about when their biggest moneymaker, The Junkyard Dog, just walked out of the company in order to join Vince McMahon’s WWF in the early 1980s, along with Watt’s opinion of the situation. McMahon’s taking over Georgia Wrestling on the cable channel WTBS is covered, where after dealing with the situation, Watts and Ross decide to go national with the Mid-South to compete with the WWF.

Ross gives his take on many of wrestling’s top stars, such as Ric Flair, Dusty Rhodes, Steve Austin, The Rock, Randy Savage, and more, as the book takes the reader through Jim Crockett’s NWA, Ted Turner’s WCW, and McMahon’s WWF/WWE. Ross also describes some of the bad creative decisions in his wrestling career from being on the creative committee, with angles involving Flair and Ricky Steamboat, the Ron Garvin NWA Title reign, and how he felt the NWA/WCW handled Steve “Sting” Borden as champion. Ross also informs the reader about his time in the WWF covering famous feuds, such as The Undertaker and Mankind’s “Hell in the Cell” cage match, the ill-fated “Brawl for All” Tough Man competition, and the famous “Montreal Screw-Job” involving Bret Hart and Shawn Michaels.

Ross covers the revolving door in WCW’s management, which could have been a book in itself on how to manage many different bosses in a short time. Not only were there multiple managers in charge, but he also had to deal with a rotation roster of bookers as well, from Flair, Rhodes, Watts, to Ole Anderson. Since Ross was also one of the announcers, he discusses his opinions on his announcing partners such as Jesse Ventura, Bobby Heenan, Jerry Lawler, Gordon Solie, Lord Alfred Hayes, and Curt Hennig, along with interactions with celebrities Muhammad Ali, Mike Tyson, Butterbean, and Robocop.

The book is not just about pro wrestling; it is an inspiring tale about a man who had to overcome obstacles to achieve his dream of being in a business that was closed off to many and secretive. Ross overcomes low pay after traveling hundreds of miles, failed marriages, losing the family business store, and overcoming health issues with his fights with Bell’s palsy. Someone not familiar with professional wrestling can still find an uplifting story in Ross’s memoir. This is a tale about a man that wanted to be a part of sports entertainment and made it to the top, via hard work, determination, and a strong will.

Overall, the book is a great read, mixed with humor and inspiration. I would have liked a few more stories dealing with Sting and WCW, but with Ross’s decades of experience, there are bound to be stuff passed over, unless he wanted a 1000 page book (my book has 319 pages without the afterward, which my copy did not have).  There is enough background information about his younger years that make the book interesting, without drawing out multiple chapters, like some memoirs. The chapters are mostly short, which is something else I love about the book. The book ends in 1999; right after Ross announces the Wrestlemania XV Main Event between Steve Austin and The Rock.  Those that follow wrestling would know that Ross has many years left to cover in his career, and maybe another book will be coming in the future, but just like in the wrestling business, Ross’s book leaves the audience wanting more, which is a good thing.

Slobberknocker; My Life In Wrestling by Jim Ross with Paul O’Brien will be released in October 2017.

A special thanks to Sports Publishing, an imprint of Skyhorse Publishing for the Advanced Reading Copy.

One of my pet peeves when talking about music from the 1980s is when people assume acts were One Hit Wonders because their most popular song is constantly played on radio stations or on compilation CDs (along with the term “Hair Metal,” which really drives me nuts, because the band’s hair had nothing to do with their musical talents).  Some people may not know but the radio format plays the same songs almost every hour, even during “Time Warp” Weekends (where radio stations play all songs from the 1980s), so it’s easy for newer listeners to assume that some of these music acts only had one hit, for instance when people  think of the band Mr. Mister, they think of “Broken Wings,” but forget about “Kyrie” or “Is It Love,” which both hit the U.S. Charts, or the Australian band Icehouse, who recorded the song “Electric Blue,” but forget about my favorite of the band, “Crazy,” which hit #14 in 1987. Or even the Canadian band Men Without Hats, who we know from “The Safety Dance” hitting #11 on the U.S. Charts, but do you remember their other 1987 hit “Pop Goes The World” that charted at #20?

We can blame it on ignorance (not everyone studied music like I did, trying to know who wrote the songs or its chart position due to my childhood listening to Casey Kasem’s “American Top 40” every Saturday Morning), or due to the format of radio today, but I thought I’d look (an hopefully inform) at a few British acts that are usually viewed as One Hit Wonders, but really weren’t.

When people think of the 1980s British acts, artists like Duran Duran, Elton John, Rick Astley, and George Michael come to mind. However this list above is often misjudged as One Hit Wonders, when in reality, they had great success. I encourage you to check out these acts’ other songs-you may find some more gems to add to your playlist that you don’t hear on local radio.